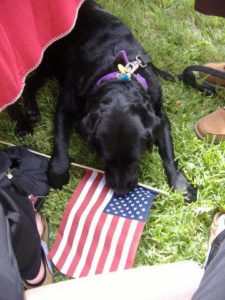 Amid the backdrop of taxidermied wildlife, camouflage sportswear, and camping gear, a group of war veterans—young and old—circulates around the main floor of Cabela’s sporting goods store with a look of concentration in their eyes. Each vet focuses on his or her partner and, together, they practice the skills they have learned and refined over the previous months. There is a gentle touch. A command. A reward. There is also praise. Lots and lots of praise.

Accompanying these veterans are no ordinary companions. These are service dogs from the Train a Dog, Save a Warrior (TADSAW) program based in San Antonio, Texas, and today they are finally testing their skills for certification. Although they are fresh out of boot camp, these animals have already begun to change the lives of their new handlers in extraordinary ways.

For many of these veterans, all of whom suffer from post-traumatic stress disorder (PTSD), the idea of being in a public space was not, until recently, in the realm of possibility. Army veteran Jason Thomas explained that even a simple trip to the grocery store once caused him untold anxiety, resulting in a crippling isolation. Since being paired with his service dog Delta, however, Thomas has not only begun to venture to restaurants and grocery stores but also recently attended a Green Bay Packers game with his father. “I’m getting to live a normal life again,” he said.