Joseph Heller’s 1961 novel Catch-22 is a witty, ironic discussion of the double-binds or no-win situations our WWII troops faced due to the military bureaucracy. But here’s the thing: More than 50 years later, this double-bind hasn’t gotten any better. The term Heller coined to describe “no-win” military policies can still be used to describe many of the situations our veterans face as they return home from war. The latest Catch-22 for our heroes? Post-Traumatic Stress Disorder stigma in hiring.

In a recent New York Post piece, numerous veterans describe this Catch-22 in blatant terms: If they disclose that they suffer PTSD, the New York Police Department won’t hire them. But if they hide their PTSD from the military (and the NYPD, which receives the military’s medical files), veterans run the risk of losing their health care if the condition gets more severe. 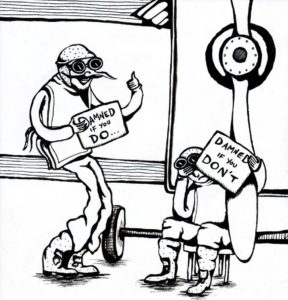 One veteran said he passed the NYPD entrance exam in 2006, before his tour overseas. When he developed PTSD from the fighting and admitted it to the military, they shared that information with the police department. NYPD then disqualified him from serving on the force.

Although it’s understandable for a police department to require mental health screenings for officers who may have to use deadly force, that doesn’t change the fact that our veterans are in a devastating double bind. Our veterans still face dire jobless rates, and often turn to addiction or self-harm when they have nowhere else to go for help. Seeking help should be seen as honorable, courageous and an important step in taking care of one’s health; but because of the stigma surrounding PTSD, a veteran wears a scarlet letter as soon as he or she divulges any PTSD symptoms. It’s time for stigma to stop trumping our veterans’ strengths and virtue.

One way to decrease these ill feelings toward PTSD, a condition affecting nearly one-third of our troops is to ramp up public education efforts. Our veterans and their families aren’t the only ones who need to understand what it means to live with this condition; employers and other civilians are a big piece of the puzzle. When we teach employers and the public to understand and accept PTSD as a treatable condition, we are helping our veterans slowly break free from this stigma.

This is where PTSD stigma has gotten our Veterans! 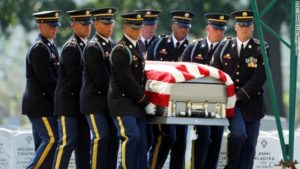 Every single day, 22 veterans take their own lives. That’s 22 suicides a day, a suicide every 65 minutes. As shocking as that number is, the real number may actually be higher.

The VA researchers used death records from 21 states to come up with a 2010 national estimate for veterans of all ages. As a group, veterans are old. Military service being far rarer than it was in the days of the draft, more than 91% of the nation’s 22 million veterans are at least 35 years old, and the overwhelming majority did not serve in the post-9/11 era.

About 72% of veterans are at least 50. It is not surprising, then, that the VA found that people in this age group account for 69% of veteran suicides — or more than 15 of the 22 suicides per day.

What is contributing to the 22 suicides a day number: The veteran-suicide statistics are likely to become a topic on Feb. 13 when the U.S. House Committee on Veterans’ Affairs holds a hearing to explore whether veterans are “overcoming barriers to quality mental health care.”, Meanwhile, Iraq and Afghanistan Veterans of America, a nonprofit advocacy group representing more than 200,000 members, said the nation should be “outraged” by rate of veterans who are taking their own lives — nearly one per hour.

Volunteers in dark green hooded sweatshirts spread out across the National Mall on Thursday, planting 1,892 small American flags in the grass between the Washington Monument and the Capitol. Each flag represented a veteran who had committed suicide since Jan. 1, a figure that amounts to 22 suicides each day.

“We’ve waited too long to take on this action,” he said. Then, mentioning the 22 suicides every day, he added, “That’s an epidemic that we cannot allow to continue, 22 suicides per day is unnacceptable.”

Active duty suicides in the military jumped by 30% since 2008, with one soldier, sailor, or marine expected to commit suicide in the next 25 hours. Ex-military suicides also increased 10% over the same period to about one every hour.

According to Joachim Hagopian, a West Point graduate and former Army officer, “22 suicides a day in unacceptable, more military personnel died from suicide in 2012 than from fighting in Afghanistan and once they return home and become civilians they are killing themselves at a rate three times that of military active duty personnel.” The April 9th hearings are following release of a report the VA quietly paid $200 million to settle 1,000 wrongful death suits that were filed over a ten year period following 9/11. Hagopian believes the military has been trying to avoid public discussion of the military’s 22 suicides a day.

The Department of Defense 2014 budget states that as the US transitions out of the cost of being in Afghanistan, the Defense Department will be allocating increased funding for mental health programs for US soldiers and veterans. The Obama administration is hoping this will help to lower the more than 22 suicides a day.

With 22 veterans expected to commit suicide today (22 suicides), developing and expanding effective veterans’ mental health and social support systems must be a priority of the Obama Administration, Veterans Administration, and Congress. These men and women have given their best for America; it is our responsibility to provide the best for our heroes.

That’s 1,892 former soldiers who have killed themselves since the beginning of 2014, (22 suicides per day) according the Iraq and Afghanistan Veterans of America organization (IAVA). But even that is a conservative number, some say, as there is no centralized system to track veteran suicides.

A recent poll found that more than half of post-9/11 veterans know at least one colleague who attempted or managed to kill themselves. For many, the list of friends lost to suicide is much longer. “How can we accept 22 suicides a day”, asked a Pentagon spokesman.

Mental health is one of the greatest challenges facing returning soldiers, but a deadly combination of indifference, stigma, red tape, and government dysfunction are to blame for the sobering numbers.

That was the message brought to Washington last week by veterans of the Iraq and Afghanistan wars and their supporters, in their annual “Storm the Hill – 22 suicides” campaign, which aims to raise awareness among lawmakers about the struggles of returning service members. This year, suicide topped the list.

For any information or an application please contact Program Director, BART SHERWOOD, at 210-643-2901 or bart@tadsaw.org.